And He said to them, “Cast the net on the right side of the boat, and you will find some.” So they cast, and now they were not able to haul it in, because of the multitude of fish.  John 21:6

The past months have seen an abundance of anchovies in the Monterey Bay. Along with this population boom of anchovies there has been an abundance of birds and animals feeding on the prolific numbers of fish. Pelicans, gulls and cormorants feed in mass aggregates. Pelicans drop from the sky like missiles plunging into the ocean in hopes of catching their prey. The pelicans and other birds are not alone. Whales, dolphins, seals and sea lions are also present in unusually large numbers with whales coming in much closer to shore than they normally do following the great schools of fish.

I was fortunate enough to capture some video of this ornithological phenomenon when both the fish and birds were very close to land and just below the cliffs that I was shooting from. 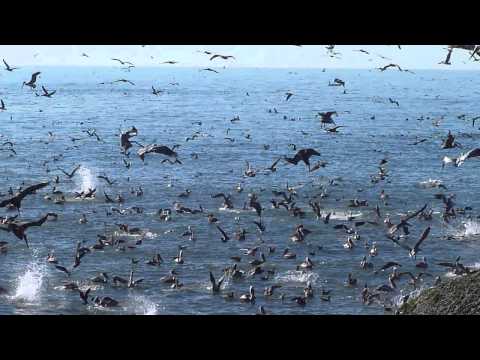 …like the sea itself, the unconscious yields an endless and self-replenishing abundance of creatures, a wealth beyond our fathoming.

I had a client some years ago who came into a time of abundance precipitated by her move to a new state and job. Here is one of her dreams from right before this move:

I’m on a cliff path overlooking the ocean at sunset time, which is when I realized that the ocean is most alive.  I see many fish jumping and whales spouting.

My client described this time as magical for her. After arriving in a new town and different state, she purchased a home, “a dream home,” as she called it. She also met new friends, including some that developed into deep and lasting friendships, and she entered into a particularly meaningful romantic relationship.  Additionally, she explained that she was feeling more confident and successful at work.

Prior to this “phase of abundance,” she had had a long period of solitary time and a series of dreams that included images of the desert. During this time, it could be said that she was in a “desert phase” of her life.

To everything there is a season, a time for every purpose under heaven…Ecclesiastes 3:1

Just like the population boom found in nature like the huge Monterey Bay anchovy explosion, the human psyche too can provide times of great abundance. Whether the abundance comes from within—the great reservoir of the unconscious—or whether you notice abundance in the outer world that parallels your inner process—this time can be a significant part of your journey. Like the pelicans that drop from the sky like missiles straight into a teeming mass of life, when abundance knocks, it is time to act.

Jung, C.G. (1966). “The Psychology of the Transference,” in The Collected Works of C.G. Jung, vol. 16, The Practice of Psychotherapy. Princeton, NJ: Princeton University Press.